French Bulldog price in India across all major cities If you are fascinated by this beautiful dog and wanting to understand the total cost of ownership and French Bulldog price in India, you are in the right place. We at barks.in have extensive experience in breeding and selling dogs in India. This rich experience enables us to understand and present the various costs of maintaining a French Bulldog in India.

About French Bulldog in India

French Bulldogs are gaining in popularity in India. This peculiar and yet beautiful-looking toy dog is a head-turner. French Bulldog’s slow and funny character, short coat, and small size make this dog easy to maintain and apartment-friendly.

The comical-looking French Bulldog with its round face and erect ears will melt hearts. This dog was recently featured in a mobile phone Ad nodding its head to lively music, adding to its rising popularity.

The remarkable French Bulldog is from France, specializing as a companion dog and a house pet. The French Bulldog’s peculiar shape is due to its Toy Bulldog and ratters origins. Their short legs, almost human-like face, and laid-back character make them one of the world’s most popular dogs.

French Bulldogs love close companionship and don’t like to be left alone. Their peculiar shape has earned them the nicknames Frog dog and Clown dog. French Bulldogs, like other Mastiff-type dogs, don’t bark.

Dogs are emotional creatures and have specific needs that require financial commitments from you as their pet parents. Hence, we urge you to understand French Bulldog’s price in India and all associated commitments before bringing home a French Bulldog puppy.

You need to consider several factors affecting the price of a French Bulldog puppy. Factors such as

When we are on the lookout to buy a French Bulldog in India. Most of us stop at the initial cost of the puppy and miss to account for recurring expenses. Remember, French Bulldogs are dogs that need special care. This small dog, with its long spine, is prone to spinal injuries.

A full-grown adult French Bulldog can weigh as little as 7.5 kgs and needs proper care. When you buy a French Bulldog, you must also account for its foreign origins. These dogs are not like the native Indian dog breeds that can thrive on homemade food and live happily in our hot and humid climate. Hence, understanding the total cost of ownership for a French Bulldog will help you plan your budget before buying a puppy.

How to read our French Bulldog price list across all major cities in India? 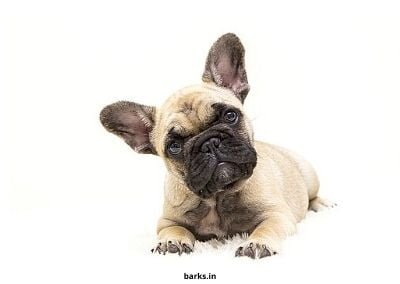 As breeders of dogs in India, we have an in-depth understanding of the breeder’s costs. We hope to use our knowledge to establish useful guidelines for sellers and buyers of French Bulldogs in India.

We also know that French Bulldog prices can vary significantly. For instance, a puppy from an imported French line can cost you between ₹65,000 to more than ₹80,000. We consider these variances in price as exceptions than the norm. Our French Bulldog price list, on the other hand, works on averages.

Factors that influence the French Bulldog price in India

French Bulldogs, due to their mastiff origins instincts, can be challenging to train. This dog breed is easily distracted and also has a stubborn temperament. If you are a first-time dog owner, you might find this breed difficult to train and manage. This fact does not mean French Bulldogs are not for first-time dog lovers. With time, patience, and love, you should be able to manage this dog.

If you are looking to buy a French Bulldog puppy, it is vital to understand all the costs involved. A non-native dog such as the French Bulldog is expensive to maintain. You must consider the below factors when you plan your finances.

French Bulldogs are not expensive as other non-native dogs. Since this breed is still rare in India, you will find only a handful of reputable breeders in any city. The initial French Bulldog puppy price depends on the following.

The average cost of a French Bulldog in India is between ₹50,000 to ₹80,000. The high cost is due to the rarity of this breed and its soaring popularity.

There is a significant price difference when you buy a French Bulldog from reputable breeders versus a pet shop. India is home to some of the best dogs in the world. Dogs from top Indian Kennels can be expensive.

Finding the right breeder is the most critical aspect when you are looking to buy a French Bulldog. This dog breed is prone to intervertebral disk disease, hip dysplasia, and elbow dysplasia. The short nose and ribcage French Bulldog needs special care. You want to ensure that your French Bulldog puppy’s line does not have any deadly genetic disorder.

You should find a French Bulldog puppy from any one of the following places in India.

Puppy mills are horrible places that are run by people whose sole purpose is to make money. Their dogs are badly maintained, poorly fed, and kept alive only to produce puppies.

You can easily spot a puppy mill seller; his price is generally low, and they will never allow you to see the puppy with its mother. They use terms such as heavy bone, show quality, and show-winner to lure people.

Buying a dog like the French Bulldog from places like these can result in severe problems down the road. Your puppy can have genetic issues or, worse, can turn out to be an aggressive dog. Don’t buy your puppy because the price is tempting. We know some puppy mills sell their dogs for as low as ₹30,000 and claim their puppy to be show winners.

Don’t make the mistake of window shopping for a French Bulldog puppy. We recommend that you never rush into buying a puppy. Once you choose a puppy, it will become part of your family. Don’t be hasty and pick up a puppy from a pet shop because it looks cute.

To verify if the pet shop is an authentic breeder of French Bulldog, ensure the following.

Buying a French Bulldog from a Broker

Getting connected with a dog breeder through a broker is a great idea. Talking to the broker about the French Bulldog will help you understand its background.

Did you know, most dog sales in India happen through dog brokers. They play a vital role in bringing buyers to sellers. A good broker will directly take you to the dog breeder and be happy to answer all your queries. A broker typically makes a 10% to 15% commission from the resulting sale, a small price to pay when buying a non-native dog.

Buying a French Bulldog from a reputable Breeder

While the French Bulldog price might be higher, you can rest assured of its quality and health. We recommend that you buy your puppy from a breeder and don’t worry about spending a few extra bucks. Remember, the additional money that you pay will guarantee a worry-free ownership experience for you.

How do I find a reputable French Bulldog breeder?

Regular home breeders are people who are in between professional breeders and pet shops. These are serious French Bulldog fanciers who love their dogs and breed them at their homes.

If you are looking to buy a French Bulldog, you can consider buying from regular breeders. We recommend that you get in touch with them directly or through a broker and speak to them about their dogs. Ask for KCI certificates to verify the lineage.

Once you make up your mind to buy a puppy, visit their home, and meet their dogs. If you are lucky, you can get a top-quality French Bulldog at a low price. We recommend that you choose a brand that offers breed-specific dog food. Your dog food cost will vary depending on the brand. Remember, French Bulldogs don’t reach their full potential if you feed them only homemade dog food.

On average, expect your monthly dog food cost to be between ₹1,500 to ₹2,000. We recommend reading our top dog food review in India to choose the right dog food for your French Bulldog.

Before you buy a French Bulldog puppy, it is a good idea to visit a veterinarian near your home. Speaking with the vet will give you a good idea of all the medical expenses you can incur.

The following are some of your recurring vet costs.

If you don’t intend to breed your pet dog, neutering helps avoid health issues in dogs. Breeding a French Bulldog or any dog is not easy, and we don’t recommend it.

Breeding dogs is a responsibility. Improper and incorrect breeding can have a devastating impact on the entire breed. Several native Indian dog breeds are near extinction due to poor breeding practices.

As a French Bulldog breeder, you must know breed standards, genetics, and a deep understanding of these dogs’ mental makeup. Also, the cost associated with breeding dogs in India is very high.

Remember, spaying is a surgical procedure. If you don’t have competent veterinary care in your city, we are not for it. Spaying can cost you between ₹7,000 to ₹10,000.

Deworming and other medical expenses

Your French Bulldog will need deworming every three months. Worming your dog ensures proper health and well-being. Consult your vet on the worming medication and dosage. As the dosage size is proportional to the dog’s body weight.

Also, you will need

French Bulldogs have sensitive skin, so choose a mild shampoo and avoid bathing your dog more than once each month. Grooming brushes are not expensive, but these are expenses that you will incur.

Your dog will need the following.

Employing a dog trainer can greatly benefit your dog and your family. It is fun to have a dog that can perform tricks and obey on cue. In India, a top dog trainer will charge you ₹5,000 to ₹7,000.

While treats are not expensive, these are vital for training your French Bulldog puppy. Commercial dog treats can be costly. We prefer homemade treats as they are inexpensive and healthy for your dog. We recommend homemade treats such as boiled eggs, cheese, and cooked meat.

We recommend insuring your French Bulldog. Insurance premium for a small dog covering medical expenses and liability will cost you ₹500 to ₹1,000 from Bajaj Alliance.

As a companion dog, French Bulldog needs their daily walk. These dogs cannot live in confinement places. Dog walking is a new booming industry in India. Dog walking services will cost you ₹500 to ₹1,500 per month, depending on your city.

French Bulldogs are one of the best dog breeds for an Indian home and family. They are loyal, affectionate, intelligent, and loving dogs. If you plan on buying a French Bulldog, you must understand all the costs involved in maintaining one.
Don’t make the mistake of thinking your expenses reduce after you buy the puppy. Dogs are expensive dogs to own. We recommend that you fully understand the total cost of ownership for a French Bulldog in India before bringing one home.